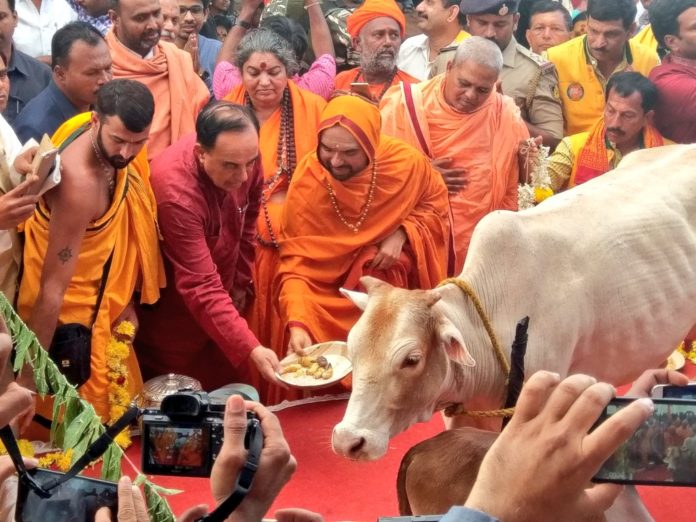 Recently Prime Minister Narendra Modi is trying to create awareness among the people of Karnataka regarding the importance of the cow and why people should protect them. But if you can go through the details, you will be able to know that this is not the matter of vote bank politics. It is the question of culture. Yes! It is the Question of Indian culture. In India ‘Ahimsa’ is the ultimate vision of life. And Bharatiya Janata Party is trying to protect that through various activities. The case is same for the state Karnataka also.

Can you remember that day in the year 2013 when Siddaramaiah government took first move to lift the ban on cow slaughter? K Siddaramaiah, who took over as the 22nd CM in the state at that time, was all set to face a stormy legislative assembly session. He took several decisions after being sworn-in but one of the most highlighted decision was to reverse the previous Bharatiya Janata Party government’s decision to ban cow slaughter in the state.

In 2008, when BJP got power in the state they decided to implement a ban on cow slaughter in the state and had passed the bill of Karnataka Prevention of Cow Slaughter and Preservation. Actually, this was only the ego issue and to turn down BJP Siddaramaiah government had taken that decision. And obviously, the big reason is Muslim votes. To appease them it was his first destructive decision to strengthen his chair as a CM. there was not a single logic which was ethical.

Why BJP implemented a ban on Cow slaughter? Is it a political perception or Hindutwa or respect to Indian culture?

All Indians respect, honor and adore the cow. By honoring this gentle animal, who gives more than she takes, we actually respect all creatures. It is not the matter that the animal is an intermediate part of an ecosystem and the animal will be consumed by some other creatures. That is why BJP told, “if permission is obtained from an authority, animals above the age of fifteen years can be slaughtered”.  But what’s happening is really a different thing. Here it is not the question of Hindu or Muslim. It is really a valuable question of respect to an animal who gives more than she takes.

Hindu religion respect and honor all the living and even non-leaving creatures in the world which includes – mammals, fishes, birds and many more. They really acknowledge this reverence for life in their special affection for cattle. Even every year at festivals they decorate and honor the cow, but they do not worship cow in the sense that they worship the Deity.

To the Hindu religion, the cattle symbolize all other creatures. And for the cow, they think that it is a symbol of the Earth, the ever-giving, and undemanding creatures. She represents life and the sustenance of life. The cow is so generous; she takes only water, grass and grain. But it gives and gives of its milk which is the best food ever proved in the history of the earth. It is to be understood that the cow is so vital to life, for many humans. The cow exemplifies the cardinal virtue of Hindu religion by her docile and tolerant nature. The cow also symbolizes endurance and selfless service.

BJP always gives respect to Indian culture beyond any politics and this is one of the best examples of the case.

Why Siddaramaiah Government Lifted the Ban?

The reasons they told to lift the ban was also positive and cannot be neglected. There was a blanket ban on cow slaughter across the state Karnataka from 2008 to 2013. It was passed in the legislative assembly. However, Siddaramaiah made it clear that the bill will be withdrawn.

Siddu’s first and most important logic was that- it will affect beef-eaters and also those people who are linked into transportation of cattle. It also has an impact on the people in the leather industry and the meat packaging industry.

When Bharatiya Janata Party had introduced the amendment bill for the same, the Congress had petitioned the governor and Siddaramaiah had opposed the same. The original 1964 act stated that cows, calves or she-buffaloes cannot be slaughtered. However, it is allowed provided they were more than 12 years of age and also unfit for breeding, did not give milk or victims of drought.

The bill has been contentious in the state Karnataka and the movement of banning cow slaughter was strongest in Mangalore. There was a no of protests over this issue and the BJP decided to ban cow slaughter despite reservation from the Muslims.

At that time a debate on the floor of the House with more than forty legislators decided to oppose this issue. BJP leader Mr. Suresh Kumar, then law minister, told, “Let it come to the assembly. We shall debate on the case. We had taken the bold decision to prevent the in-discriminatory slaughter of the cow.”

Now BJP is seeking to create awareness among the people in Karnataka on the ‘multi-dimensional’ importance of the cow and needs to protect the population of cattle in the state and also in the country. They have organized a 24 hour ‘Go Raksha Asthayama Yagna in Bengaluru in the recent days.

According to the state convenor of BJP’s Cow Protection Cell Siddhartha Goenka, “the awareness is very much important and we need to protect the cattle population to strengthen the rural economy at the grass root level”

So it can be concluded that there is nothing wrong to protect an animal. And obviously, it is very much ethical. So BJP is doing the right thing to create awareness for the campaign of cow protection not only in Karnataka but also in the whole country. The 1964 original act regarding the same has also stated that cow should be protected. They can be slaughtered provided they were 12 years of age or above. And the secondary but important thing is that the protection of cow and all cattle will increase the population of cattle in rural areas, which can help the state and our country to improve the rural economy as a major percentage of people in our country. are dependent on cow milk business

According to our Indian law, the cow has the same right to freedom just like a human. In our country, there are thousands of cows that walk the street freely. As per the law, they shouldn’t be harmed by any human. However the written law has only been carried out recently, but the original acts have been carried out for many years. Generations amongst generations have taught their successors that respect for the environment is considered to be a religious and ethical duty in the Indian culture. So it is the right point of ethics not the point of politics.