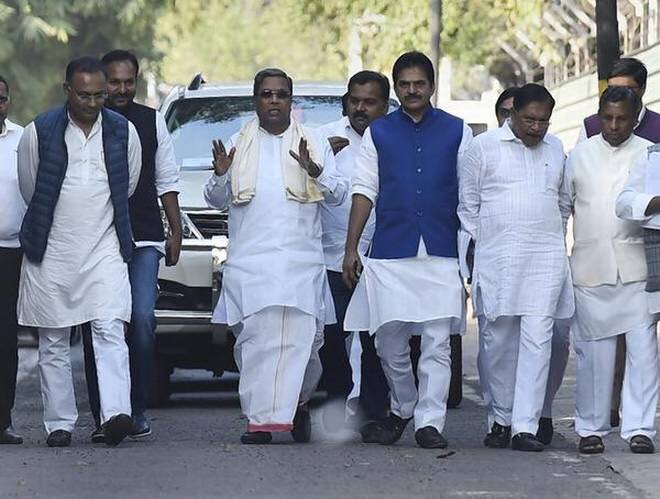 It is really that every day, a new scam, new corruption, a new allegation is being leveled against their leader, against their minister or against the program of the government, in every part of Karnataka. As per many allegations, it has been found that Karnataka government takes 10% commission for each and every task they performed at the state level, district level or in panchayat level. That is why everyone is calling their government as 10 percent’s government.

Recently PM Narendra Modi Attacked the Siddaramaiah government in the coastal state, Karnataka regarding his performance in the state. Since last few years, Karnataka has not given priority to any mission or any big project. In construction work, legal projects, farmers’ demand, real estate distribution or governmental auction process, in no case this state government has given priority. This is not only the comment of Prime Minister, this is the actual fact. Though the acceptance level of BJP and Congress in Karnataka is almost 50-50 it is well known to every one that their current government has not completed any significant successful mission for the development of their state.

Prime Minister said the welfare of the public was never a priority and that is the main reason why Karnataka needs a mission government. In our country, Modi government is ruling for last 4 years. Initially when BJP government took the chair in Delhi in 2014, BJP also promised for many improvement projects including black money solution, bullet train project etc. and they also didn’t able to achieve a single target till date but the direction in which BJP started their all missions, surely it will give us a positive result in future.

I can remember an incident, I have heard from my music teacher when I was in 6th standard. My parents sent me to the music teacher to learn singing. On the very first day, my parents asked the teacher that- how many weeks it will take to learn singing. My teacher replied that it cannot be count in ‘weeks’, because it will take at least 5 years. My father again told the teacher that his son is talented and he also told that- his son can sing a little bit, then it should take 2.5 years to learn singing. My teacher smiled and replied that- if you are saying that your son can sing a little bit, then it will take 10 years to teach him the singing.

I and my father surprised but the teacher explained that it will take5 years to reverse my knowledge, what I have learned till date, to ‘zero’ and then the learning process will start and it will take 5 years to learn everything.

It was actually a story already written by someone and it was well known to many others but it was completely unknown to me and my father. And my teacher applied the same comment to me.

Now a day, I can easily understand that the Congress government is in the state of Karnataka even in the country, like me. Already it has gone in a negative direction.  And BJP is on the zero platform or little bit towards the positive direction. All the missions of BJP, started in 2014 are completely going towards the improvement of our nation. There are many examples which can support the comment. Starting from Adhar linking with LPG connection to demonetization, all are the real example of BJP’s mission towards social and human development. It is very true that some of the missions didn’t get success but it should be noted that the direction was completely positive which we didn’t find from the day of India’s independence.

According to Prime Minister Modi, “As long as there is a Congress government in the state Karnataka, it cannot progress. The state does not require a ‘commission’ government, they require a ‘mission’ government”. Can the next election give a right result which can lead Karnataka to a right direction? State assembly elections are due in Karnataka in this year in a few months.

PM Modi claimed that despite the Congress ruling the country for about 60 years four crore families in the country are without power. Since 1947 for over 50 years, it was only a single party that ruled India. But what is the reason that till date 4 crore families are living without any power supply? It means Congress has not ensured the well being of the people our country for all these years. How a man can repose faith in the Congress.

Although opposition always tries to highlight some extra facts and that is not the exception for Narendra Modi also in this case of Karnataka but it is true that the Congress didn’t care about the development. Their one and only target were to gain the maximum vote. And sometimes they even tried to hamper the development of that state. “Over the years, many schemes were discussed and debated in Parliament but those have never been implemented on the ground. But BJP has started least something after gaining the power in center. And this is the only hope for the state and for the country also.

There are many examples of the missions started by Modi government. Starting from ‘Sachh Bharat’ mission to ‘Make in India’, all are really the true examples of successful mission of BJP government in our country. His recent railway network improvement mission is also another example. At least we can see some good work in the state if BJP gains the power in the state. Now everyone wants to see the word mission in place of ‘commission’.