The Marjory Stoneman Douglass high school mass shooting is the genesis of resurrected debates on stricter gun law controls happening in America. Immediately after the tragedy that caused 17 fatalities, residents in different states took to the streets to protest against the loopholes in gun laws while calling on legislators to review the laws and make them stringent.

Following the incident and pressure from Americans, the federal government and different states began to forge a channel to review gun laws. Recently, Florida Governor Rick Scott signed in to law a bill that the state had been working on for the last three weeks. Scott stated during the signing of the bill at Florida’s Capitol that the federal government should borrow a leaf from his state emulating the speedy manner through which they came up with a solution and effected it.

As an aftermath reaction to the Florida high school tragedy, Trump took on a sterner stance when he advocated for tougher gun control laws while backing sweeping changes to the gun laws. Even though he “stepped on toes,” especially the National Rifle Association (NRA), a gun rights lobby group, he seemed to stick with the stricter proposed gun controls.

Trump was for the provision that gun purchasing age limits be moved from 18 to 21 and extensive background checks for individuals buying guns. The NRA is against such a move and has even moved to court in Florida to oppose the unconstitutionality of the new Law. His new stance on the matter involves the introduction of a commission led by Education Secretary Betsy DeVos. She is tasked with the mandate of studying the age limit and background checks contentious proposals and determine recommendations.

On the other hand, the Justice Department will provide grants to states that plan to train teachers to carry guns in schools. The idea is backed by the NRA and is already in place in some states. Trump believes that by arming teachers, it will deter school shootings and in the event of one, protect the students.

Meetings with the NRA

The president held two private meetings with the NRA last month. The agenda was to come up with proposals that would close loopholes for buyers evading background checks and the age limit for purchasing rifles as well as come up with ways of seizing guns from people deemed dangerous. Trump’s initial enthusiasm was not shared by many Republicans and as such, his latest move could be wary of the midterm elections scheduled for November. 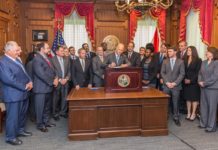