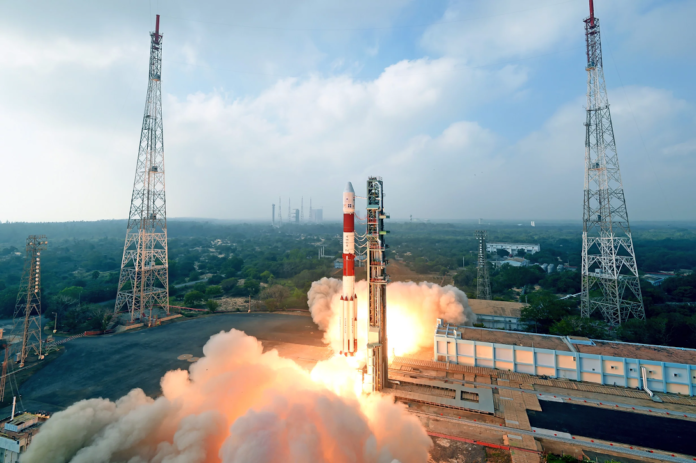 The weather observation satellite Cartosat 2 series was successfully launched with 30 other spacecraft by Polar Satellite Launch Vehicle on Friday. This achievement marked the historic 100th launch by Indian Space Research Organization (ISRO) after it was established on 15th August 1969. The mission was special because Indian prowess in Space Missions has been on the rise in past few years.

Hitting a century, the Indian Space Research Organization (ISRO) successfully launched its 100th satellite along with 30 other spacecraft including weather observation Cartosat 2 series onboard the Polar rocket on Friday. Take a look at the details of the successful missions of ISRO in past one year that proved India’s capability in space prowess.

The success of Indian Space mission has left its neighbor Pakistan in a rather jittery position. Despite being the establishment of its own space agency before India, Pakistan has been successful in making only snide remarks and criticism of India. ISRO marked its century in the space race by launching its 100th satellite along with 30 other satellites.

The Polar Satellite Launch Vehicle-C40 was launched on Friday and it carried the 710 kg Cartosat-2 and thirty other satellites. The launch of the earth observation satellite and others was conducted from Satish Dhawan Space Cente (SDSC) in Sriharikota. The launch was important after the unsuccessful launch of an IRNSS-1H satellite in August 2017.

Pakistan, as usual, raised its concern over the launch of the earth observation satellite by Indian Space Research Organization. It said that the launch will lead to negative impact on regional strategic stability. According to them, as the satellite has dual nature, military, as well as civilian so India, will use to have a military advantage in the area and it will lead to further instability in the region.

The spokesperson of Pakistan’s Ministry of External Affairs, Dr. Mohammad Faisal said in a press conference that the reports said that India has launched 31 satellites in total including the earth observation satellite on 12th January. He said that the Pakistani defense was concerned about the launch because it can be used for the military purpose as well as civilian.

Dr. Faisal answering to a question said that the nature of the satellite will lead to the instability in the region. But the Pakistani Foreign ministry was characteristically unimpressed and even issued a warning that India should postpone the launch and that satellites should not be used for military purposes.

Indian Space Research Organisation was established in 1969 and Pakistan’s Space and Upper Atmosphere Research Commission was established 9 years later in 1969. But the fact is that one is conquering international milestones and even compared to NASA and its counterpart Pakistan is still busy in only raising concerns.

India made a world record when ISRO launched 104 satellites in a single mission in its 39th PSLV flight. This time the Polar Satellite Launch Vehicle was successful in launching a 714 kg Cartosat-2 Series.