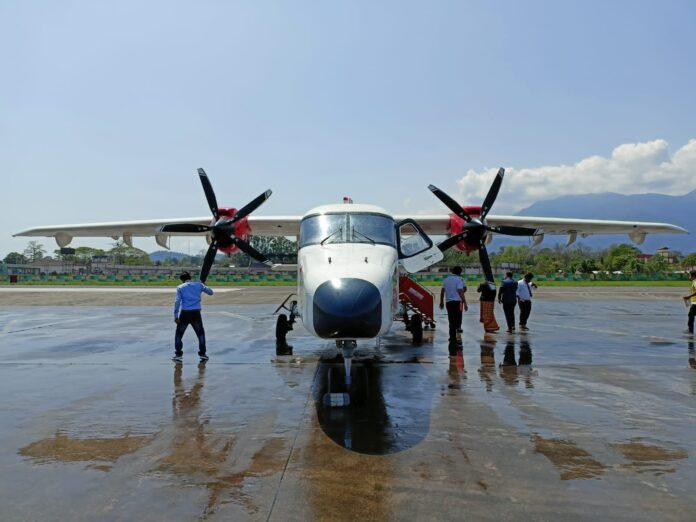 The first passenger plane made in the country started its journey on Tuesday. Union Air Minister Jyotiraditya Scindia and Union Law Minister Kiren Rijiju arrived at Mohanigal Airport in Dibrugarh today as passengers on a 228 Alliance Air Dornier flight to Arunachal Pradesh.

Although the Alliance’s Dibrugarh-Lilabari-Pasighat-Guwahati flight was officially launched on Tuesday, regular flights will be launched from April 18. Hindustan Aeronautics Limited has built the first passenger Dornier aircraft in India. “Today is a historic day for a self-reliant India,” said Scindia. Hindustan Aeronautics Limited has signed an agreement with Alliance to supply two 17-seater Dornier DO-228 aircraft in lease.

According to Alliance Air, under the flight project, flights are being launched from Dibrugarh in Ujani Assam to five cities in the northeast. Scindia said flights between Dibrugarh-Teju and Dibrugarh-Zero will also be launched in the next 12-15 days. After that flights will be operated from Dibrugarh to Tutting, Mechuka and Vijayanagar.

Rs 227 crore has been allocated for the improvement of air communication infrastructure and ‘Advanced Landing Ground’ in Arunachal Pradesh. Rs 182 crore has been allocated for the development of 16 airstrips and helipads in the North East. He said, “Currently, 20-25 percent VAT on air turbine fuel is imposed in Arunachal Pradesh. But on my request, the Chief Minister has decided to reduce it to 1 percent. Thanks for that.”