India’s Rohit Sharma created history at the Holkar stadium in the second Twenty20 International against Sri Lanka. He equaled South Africa’s David Miller’s world record of 100 runs off 35 balls, which is the joint-fastest century in T20 International Cricket. He really hammered his way to the landmark from only 35 balls against Sri Lanka in Indore on Friday. South Africa’s David Miller set the milestone against Bangladesh in October 2016.

Opener Rohit Sharma smashed ten 6s and twelve 4s before he was eventually dismissed for 118 in 43 balls.  In that situation, India’s score was 165-1 after 12.4 overs in the second match of the three-match series. India is leading the series as it won the opening match with 93-run at Cuttack on Wednesday.

Ahead of the T20 match, there had been speculation about Rohit Sharma producing something special on this Holkar Stadium’s batsman-friendly pitch which has witnessed 2 One Day International (ODI) double centuries, and which incidentally were the first doubles in ODIs.

Mr. Sharma was on the money right from the start, hitting Mathews for 2 fours in the first over of the game. Very soon he got stuck into Dananjaya, getting 2 fours and a six in his first over. After that, as Gunaratne bore the brunt of his onslaught, India made 20 runs in an over.

KL Rahul really gave him good company and quickly moved into the 40s, the two having put 117 runs in the first ten overs. After that Rohit Sharma went on the charge after going past 100, hammering Thisara for 4 consecutive 6s. The hen continued his big-hitting spree but he fell for 118 off 43 balls. Total 108 runs came only in boundaries and it summed up his class.

From the very beginning of the game, he started attacking the bowlers right from the word go. He took 20 runs off the ninth over of the innings.  Rohit brought up his 50 in the same over with a maximum over deep mid-wicket. Rohit Sharma took only 23 balls to reach the landmark. He went on a mood and finally brought up his 2nd century in T-twenty cricket.

Earlier, Rohit Sharma scored a historic 3rd double hundred as India continued to be ruthless against Sri Lanka in the 2nd of the tri-series series in Mohali. Rohit Sharma was the only player to score more than one double hundred in One Day International. There are 4 other batsmen – Virender Sehwag, Sachin Tendulkar, Chris Gayle and Martin Guptill – have only one hundred each.

Rohit is captaining the Indian cricket team against Sri Lanka with Virat Kohli choosing to sit out the T20 and ODI series. His recent form and performance confirmed his name in consideration for a name in the playing eleven when India tour South Africa in January 2018. 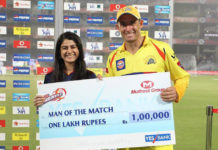 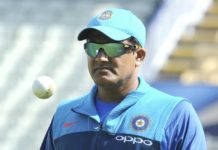 Anil Kumble Stepped Down From His Position: Team India Will Have Coach before Sri Lanka Tour