As the soccer international break approaches us there are some interesting match-ups between some of the biggest nations in the soccer world. One such game is that between Germany and England on Wednesday. Very much an international rivalry for obvious reasons it’s a game that both sides will always want to win. However, this is friendly so rather than being a feisty encounter I’d imagine it’ll be more of an appreciation of the standard of soccer within Europe. But regardless it’s a game that both sides will want bragging rights over.

Last time the two sides met it was an incredible match for the neutral supporters, a five-goal thriller. England was fairly fortunate to come out of the game 3-2 victory as for 60 minutes of the game they didn’t appear to have any sort of footing in the match. However, after going down by two goals from Kroos and Gomez, the youthful England side hit back. Kane, Vardy, and Dier all found the back of the net to take home the win from that night in Berlin. However, even though that wasn’t all that long ago both sides have seen changes to their lineups since.

Heading into the game both sides have their injured players and somewhat makeshift squads compared to their strongest squads. England is without Kane and Rooney. The Germans are without star goalkeeper Manuel Neuer and defender Jerome Boateng through injury. Given the makeshift teams, I’ve compiled what in my opinion is the best mixed 11 of the two sides from players that are available for the match in Dortmund.

In my opinion one of the most criminally underrated goalkeepers in the world, Bernd Leno puts in solid performances week in, week out for Leverkusen in the Bundesliga. If it wasn’t for the brilliance of Manuel Neuer you’d definitely have heard a lot more about this man. Despite this, in my opinion at least with Leno being only 25 years of age he’s definitely the heir to the throne once Neuer has had his day. Unfortunately for England, there’s just no way that Joe Hart can compete with the number of high-quality keepers Germany have at their disposal.

At left back there really isn’t a huge amount of choice for either side. As far as England are concerned Ryan Bertrand would be their best option but in my opinion, he’s simply not good enough for soccer on this level. For Germany the choices aren’t brilliant either, therefore my choice is Jonas Hector. A player who isn’t outstanding but always puts in a decent shift. At the center back positions, I’ve chosen Hummels and Smalling. As a Dortmund fan, it pains me to say that of the player’s given call-ups Hummels is the best of the bunch at the heart of defense. Followed by Smalling who is sure to become what Vidic was to Manchester United. At right back following the retirement of legend Philipp Lahm, Germany has struggled to fill the position and so the place has to go to Kyle Walker, an integral part of an in-form Spurs side.

Eric Dier worked wonders in the last meeting between the two sides making him almost impossible not to be included. Julian Weigl is definitely one of the futures of the German national side. The deep-lying playmaker has been performing very consistently for Dortmund both last season and this season which has seen him edge into the national side and into my chosen 11. Dele Alli and Julian Draxler have both been on fire this season. Alli has debatably been one of Tottenham Hotspurs’ most influential players this season meanwhile Draxler has been incredible since his move to PSG. His performance in the first leg against Barcelona was enough to land himself a place in my best XI. Özil is a man under constant scrutiny at Arsenal but he always performs on the international stage making him very difficult to leave out.

Possibly the most controversial inclusion is Jermaine Defoe. Both sides are lacking strikers following the retirement of Miroslav Klose and Mario Götze being out until the end of the season. England is also lacking the main striker Harry Kane and so my selection is Jermaine Defoe. A player who hasn’t played an international game in a fair while but has been in incredible form this season, scoring a good amount of goals for a team in a dire situation in the Premier League. 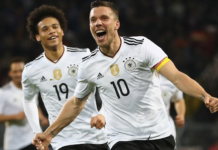