On Friday night Mike Budenholzer got out of hand as his Atlanta Hawks engaged in a huge showdown against the Cleveland Cavaliers. In all sports players, coaches and fans all have times where they get angry and sometimes situations can get out of hand. Unfortunately this time it’s the turn of Mike Budenholzer and he did what you can never do in any game, turn on an official. Getting feisty with a referee just because they made a bad decision is and always will be heavily frowned upon. However frustrating it can be officials will always make incorrect decisions, it’s just part of the game and how it always will be. After all, it’s only human nature that not all decisions will be absolutely perfect. But on this occasion, Budenholzer hasn’t respected this at all.

The Atlanta Hawks, led by Budenholzer were trying to make a massive comeback against one of the NBA’s top teams in the form of the Cleveland Cavaliers. A comeback which would have made the headlines, to say the least, but the tension got to Budenholzer when the ref didn’t call up LeBron James for an offensive foul. To be fair to Budenholzer it definitely should have been an offensive foul but his reaction was so unacceptable. He was seen standing behind the referee and giving him a chest bump but definitely not of the friendly kind. It wasn’t enough to be even close to being more than a stumble for the ref but it is the intent that you’ve got to consider. He’s gone out of his way to at the least intimidate the official which could also be seen as an attempt to interfere with overall officiating – dirty tactics.

Following on from the initial incident Budenholzer just seemed to get angrier and angrier and eventually had to be held back by his colleagues, players, and coaches. Any kind of contact with an official is just idiotic behavior and now Budenholzer will find himself with the NBA on his back, to say the least. Budenholzer was suspended for one game meaning that he was unable to coach his side against the Indiana Pacers. A game in which the Atlanta hawks very narrowly lost to the Pacers by 97 to 96. Could Mike Budenholzer have made the difference in that game if he was able to give his side guidance in the game? Who knows but it wouldn’t be unreasonable to suggest that his antics have potentially lost the Hawks that game as well as affecting the game against the Cavs.

As if Budenholzer’s actions were already bad enough the fact that tops it all off for me is that this isn’t the first time the coach has had bad run-ins with referees. Back in 2015, Budenholzer got angry at a decision similar to this incident and funnily enough, it was also against the Cleveland Cavaliers. On that occasion, he bumped into the ref after he couldn’t believe that a decision wasn’t given on what he perceived to be an offensive foul.

I really respect coaches for when they stick up for their players in bad times but going against referees isn’t the way to go about it. Making any sort of contact with officials is simply unacceptable and Budenholzer needs to cut it out of his game else he’ll be making a reputation for himself. 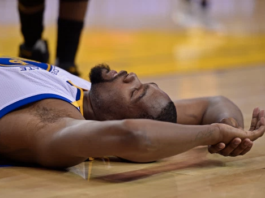